With information on engraving with SVG
(Scalable Vector Graphics) 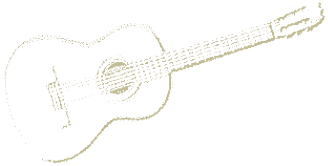 My "VectorGraving" proccess is the only non proprietary method for music notation.

At Guitar Scripts you will find some pieces never before available.

This is the opening piece from the same Partita as the, now famous, Chaconne. Not as grand as its larger sibling, but is still a nice piece of music that lent itself well to an expanded version for guitar.

I discovered, only after finishing this, that it has been a popular piece with guitarists, and probably lutenists and keyboard players, since Bach's time. It's a good thing I didn't know at the outset, or I might not have taken the time. I am pleased enough with the outcome of this to offer yet another version.

This has been transposed from G major to D major with the sixth string tuned down to D, and some additional highlighting of the strong opening theme. Additional material from this suite is pending.

I reviewed both the `cello music in C minor and a transcription of the lute version from G minor to A minor for this piece. Here it is transcribed to D minor with the sixth string tuned down to D; giving an additional perfect fifth of range and preserving most of the original base line of the lute version. Additional material from this suite is pending.

These are my three favorites from this suite; here transposed to G minor with the sixth string tuned to D.

― Prelude No. 1, The Well Tempered Clavier ―

After 20 years I finally made a printable version of this piece. My original arrangement was a Schirmer book of Sonatas and Partitas, with layers of pencil and pen annotations on top of the publishers pages; certainly unreadable by anyone but myself.

The above comments apply equally to this piece.

This music is not complex, so worked well for guitar. Here it is transposed to G minor, with the sixth string tuned down to D.

Of the several nocturnes I have planned, this one was the simplest to do. Here it is transposed to D minor, sixth string to D.

The original key for this is D minor, which I kept. But I added the sixth tuned to D, and arranged accordingly.

This is a delightful little tune that I polished up a bit.

― Promenade (1), Pictures at an Exhibition ―

― Promenade (3), Pictures at an Exhibition ―

I don't recall at what point I decided to transcribe this piano work. It was as much love for the music as it was a compulsion. Although it may seem over ambitious, I never intended to do the entire cycle, and these three finished pieces have turned out very well. For a list of the other's I am working on, click on the link at the top of the page, "In Progress". As in the original they are written in various keys, though not the original ones.

The first two lines at the top of the "Notation" page apply especially to this piece. It's one thing to arrange music written for other instruments, but to do so for a work written for guitar by a renowned guitarist is… a bit more sensitive.

This was transcribed from B minor to D minor, with the sixth tuned to D. One day, without playing through it or having heard it performed, I transposed the entire piece in pencil because it looked like it needed it. I usually test different areas of the music to check for viability of the key change, but it didn't seem to be necessary in this case. Also, I have always played a piece or listened to it before deciding to do the extra work. For two years I did no more with it because it was the last entry in that staff notebook, and the new book was filling up fast. When I rediscovered it the details of arrangement went quickly and I'm very pleased with the results.

I fell in love with this piece from a recording by John Williams, but couldn't find the guitar music for it. I did find the lute tablature on-line, and translated it to standard guitar notation, and transposed it to E minor, sixth to D.

Originally, I decided not to include this piece here. Guitarists have often played it, and the original key of D major remains. I did, however, delete four of the eleven variations. They seemed less well written, and added a sense of redundancy. After playing it again (I hadn't for some time), I changed my mind.

This is from an un-named sonata, but I have no doubt it is genuine. The transcription I was working from was in A major, and I sought a key that would expand its range. I ended up with G major; sixth to D. Although this does not increase its range, it does sound more lute-like.